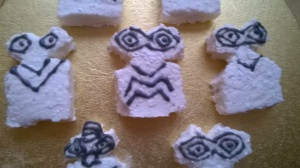 These are the idols I was trying to create:

Now, I know what you’re thinking: the most obvious material for making those is vanilla fudge. (I imagine the original manufactures only went with alabaster because fudge wasn’t an option.) On the one hand, you’d be right. Vanilla fudge would be the right colour, it would cut smoothly and shape nicely, and you could carve the markings straight onto it. On the other hand, eye idols were excavated by someone whose name sounds like ‘marshmallow’.

So first, make the marshmallow:

While the marshmallow is setting, make some eye idol templates. Turn the marshmallow out onto a chopping board, and use the templates to cut out eye idol shapes. You’ll need a sharp knife, a jug of boiling water and kitchen roll. Marshmallow is not the easiest material to cut into complex shapes, and if the knife gets sticky it becomes impossible. So every few cuts, dip the knife in the hot water and dry it (if you leave it wet, it’ll melt the marshmallow).

Place the eye idols on a surface dusted with more of the icing sugar/cornflour. Now, make some black royal icing, and, using a toothpick, draw the eye idols patterns onto the marshmallow shapes. And make some sugar cookies while you’re doing it, because it’ll take an egg white to make the royal icing, so you’ll have lots left over. I strongly suggest that instead of actually icing the cookies, you eat them by dipping them into the icing. If you make the cookies rectangular, you can pretend its humous and carrot sticks.

I know that I should be considering what a waste of time that all was, and wondering how to clean my delightfully sticky kitchen. But there’s a marshmallow eye idol in my hot chocolate, so I’m finding it difficult to be anything but content.