I know last week I promised fondant, but it’s been a busy week. Sense would suggest waiting this ludicrous and pointless blog until the busy-ness has died down. But sense is not what this blog is about. It’s about wasting large amounts of time on fairly reasonable cakes that, if squinted at in the right light, look a bit like something historical. And this week, it’s biscuits that are vaguely reminiscent of Pazuzu amulets. Pazuzu amulets like these:

Now, making these is very simple. It only took me a couple of hours, and those people who don’t accidentally loose their piping bag, forget where the butter is and burn themselves on the oven, should find this even quicker. Firstly, make the biscuits. I’ve already given the recipe for these under “Glazed brick mushhushu biscuits” (substitute 25g of flour for 25g of cocoa powder to make them chocolate). While the dough is resting in the fridge, make templates of the Pazuzu amulets. Roll out the dough, cut out the template shapes, put them on the baking tray and then put the baking tray in the fridge for about half an hour. Then, put them in the oven.

While they’re in the fridge/oven, make up two bowls of chocolate royal icing – one stiff and dark, the other liquid and lighter in colour. Fill a piping bag with the stiffer icing, and use it to outline the biscuits, and draw in any of the features that look “lower” on the amulets (I did the mouth and ears for the one on the left, and the strange beard thing for the one of the right). Leave that to set, then “flood” the biscuits with the liquid icing. Once that’s set, draw in the stronger facial features with the stiff, darker icing in the piping bag – the eyebrows, the eyes, the moustaches. 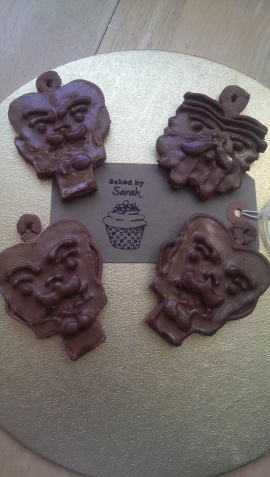 My early birthday present from my boyfriend (early because I am an impatient child, and he is too indulgent of this) is a set of stamps and tags for baked goods. I think they match the Pazuzu amulets perfectly.