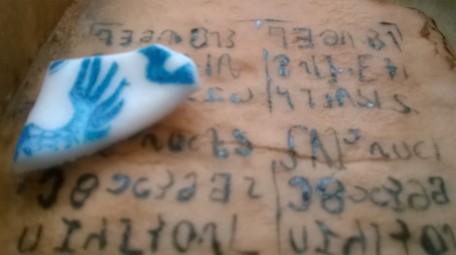 In September, my parents will be in China, where they’ll visit, among other places, one of the cities that could be thought of as a starting point of the silk road. In order to work through some of my burning jealousy, I made a silk road themed cake. 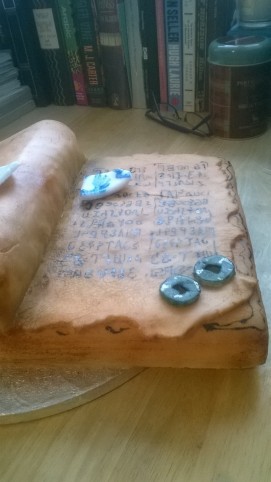 Now, I wanted the basis of this to be an ancient manuscript. After all, you can’t have a silk road cake without a manuscript. Unfortunately, while I don’t know any of the languages or scripts that were used in this area, I do know from looking at poorly copied cuneiform tablets that inaccurate attempts to replicate scripts are just the worst. Urg. No one wants to eat that. So I decided to use one of Islam Akhun’s famous forgeries, sold to the first European silk road explorers, and currently kept in the British Library. I might not be replicating Islam Akhun’s made up script particularly well, but hopefully it won’t make scholars of ancient China itch. Here’s the forgery I was working from (item Or.13873/2 on the International Dunhuang Project website):

I also made a fondant copy of one of Aurel Stein’s photographs, showing the ruined stupa of Miran. The coins are ones found by Stein (currently in the British Museum). And then there’s scraps of silk and a piece of porcelain (both also Stein’s, currently in the V and A). I…I think I sort of hoped that if I made enough junk for this cake, I could go to China (comments about how junks could get me to China will be met with heavy sighs).

Obviously this is all fondant (I really must make some more cakes and edibles that aren’t fondant at some point). The structure of the cake was a little difficult to work out. The manuscript is clearly just a stack of papers with two fairly solid rods passed through them. That means when it’s opened, it doesn’t fall open like a book. Instead, the bottom pages stay in a stack, and the top pages bend around and over (hours spent stacking papers, and trying to see how they open, are hours well spent). The bottom cake, therefore, is a single rectangle. After I’d fondant-ed it, I stacked a thin section of cake along it’s left hand edge, crumb coated that and pushed supports down through it. Then I took a crumb coated, shaped, second rectangle of cake, placed it on the supports, so it sloped away at an angle, and butter creamed the join so it had a nice curve and looked like it was all one piece. Then I fondant-ed that. That was my Saturday night.

The rest is just fondant shapes, and of course virtually everything has been painted or airbrushed in some way. Here it is with those scraps of silk i promised above. I think this might have been taking it a little too far.

The absolute most important take away from this cake, incidentally, is that the International Dunhuang Project website is just amazing. It is an absolutely brilliant place to waste time. Go there. Go there now.