I’ve been at the Natural History Museum a lot, lately, and I’m constantly delighted that the velociraptor models (and the soft toys in the gift shops) are now feathered. Watching research trickle down from the academic to general knowledge is just the best. In honour of this, I made a cake version of the most famously feathered dinosaur of all, the archaeopteryx. It turns out that the one in the Natural History Museum is missing quite a few bits, and that the best known version, with its head flipped fabulously back, and its arms/wings perfectly splayed, is in the Berlin Museum of Natural History (this is deeply upsetting to me, since I used to go to there all the time and never knew it was there, and never ran into it accidentally).

I love how rough and ready it is, with the stone chipped away just enough to reveal the fossil. I’ve used this is an excuse to make a fairly rough and ready cake, because it’s the beginning of spring and I needed to get the tomatoes planted this weekend. 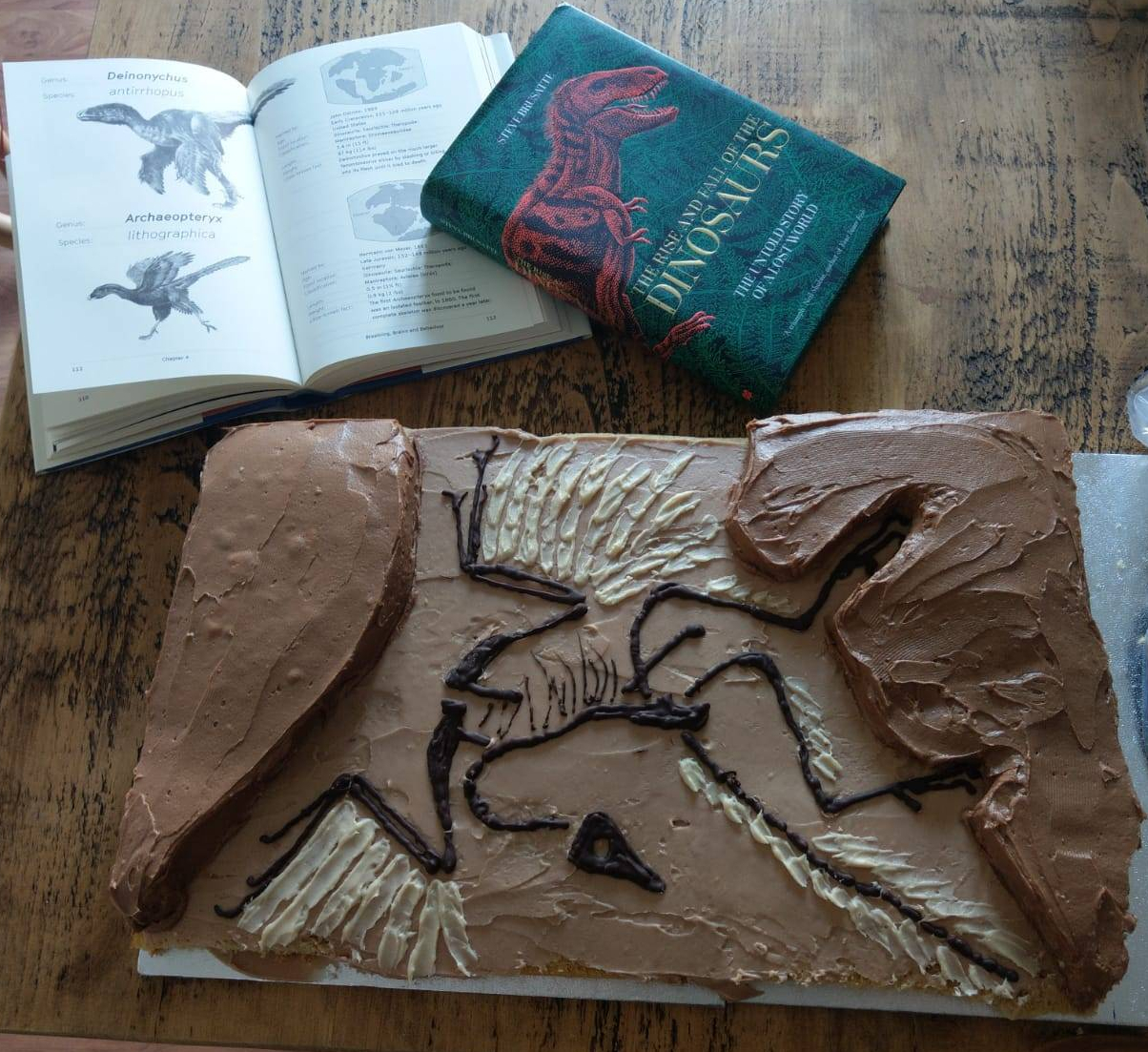 Incidentally, recent research has allowed us to see what colour dinosaurs were, which is possibly the most exciting thing ever. Melanosomes, the organelles that manufacture the pigment melanin within a cell can still be seen in fossilised feathers. The shapes of melanosomes differ depending on the colour they produced, which means we actually known that the archaeopteryx has black feathers. And palaeontologists have also done CT scans on the archaeopteryx brain-case to determine that it had a larger brain than most dinosaurs, suggesting that it could actually fly, instead of just gliding. I want to make slightly snarky comments about this, but it’s just incredible that we could know these things about a creature from 150 million years ago. And we’re currently going through a bit of a glut of good general reader dinosaur books, with ‘The Dinosaurs Rediscovered’, by Michael Benton just out, and ‘The Rise and Fall of Dinosaurs’ by Steve Brusatte in paperback. Read them both, they’re both amazing. Preferably while sitting in view of the newly feathered velociraptors at the NHM.

An archaeopteryx reconstruction, which I would make, but seriously black icing always tastes of food colouring, no matter what.

In case you want to know how I made this cake, and before I dive into more long form dinosaur facts:

Cream the butter and sugar, beat in the eggs, add the espresso, then fold in the flour and baking powder. Bake for fifteen minutes in a 20inch brownie tin at 150 degrees. Then do that again five more times (which means that despite having to use an awkward half egg per cake, you at least won’t have any left over). While those are baking, sketch out the plan of the archaeopteryx fossil on baking paper, temper some chocolate, pop it in a piping bag, and draw the chocolate over the sketch.

Lay out four of the cakes to form a rectangle, ice with some chocolate buttercream, and, once the chocolate fossil has set, place it on the cakes. Cut out the remaining cakes to form the slightly raised stone around the fossil and ice those with a darker buttercream. Then make a coffee buttercream, which will give you a nicely lighter colour, and ice on the wings. It’s a pleasantly simple cake.

And now I must go, as I have a gigantic bowl of cake offcuts and icing to devour. And tomatoes to plant.